We have a problem to solve about visitors and their experiences — maybe something about visitor behavior or unexpected disappointments.
We’re concerned with wayfinding issues in an existing building, for a new building, or for an outdoor site.
We have a unique issue about our visitors’ experience – we need help defining the issue and finding a direction toward resolving it.
We need strategies for evaluating a variety of short-term programs.

The Edward M Kennedy Institute for the United States Senate opened in the spring of 2015, adjacent to the John F. Kennedy Library and Museum at Columbia Point, just south of downtown Boston. Senator Kennedy had worked on the concept of this new museum – it was not planned as a museum about him, it’s “for us” in the sense of helping the public to understand a critical part of our government and how it works. Here’s the mission statement:

The Edward M. Kennedy Institute for the United States Senate is dedicated to educating the public about the important role of the Senate in our government, encouraging participatory democracy, invigorating civil discourse, and inspiring the next generation of citizens and leaders to engage in the civic life of their communities. 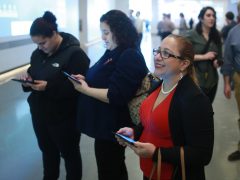 Photo courtesy of the EMK Institute

The visitor experience is unusual. For starters, you go into an orientation room where they loan you a digital tablet to carry around! And you get to be a Senator-in-training, pick what state you want to represent and what party you want to be affiliated with. Then you proceed around the building to a series of exhibit-media stations where you can find out about all the people who have ever served in the Senate (I did find a ‘Hayward’ but he was a Midwestern, conservative guy from the 1800s), and the process by which a bill becomes a law. Adjacent to the main path, there is also a 2-room suite that recreates Senator Kennedy’s office from Washington DC. In the center of the building is a 95% accurate replica of the US Senate Chamber – it’s a wow!

A few months after opening, senior staff at the Institute wondered how visitors were using the new technology, and whether visitors are getting the larger set of goals and messages? Wrapping all their concerns into one ‘focus question,’ they asked: Are we drawing visitors into the process of government? That includes the role of the Senate, invigorating civic discourse, and engaging in civic life.

How did visitor studies help the Institute staff to better understand this novel visitor experience? There were several options, but to stay within the budget we chose to do exit interviews with a randomly selected sample of visitors. We used a large photo board to help visitors be oriented to the space, investigated what engaged them, how they used the technology, and what meaning it all had for them personally.

The results showed that while most visitors did not have too many definite expectations upon entering the EMK Institute, most finished their visit with a very positive impression of their time spent there and echoed part if not most of the Institute’s mission statement. While the evaluation did point out some underutilized exhibit areas and called attention to many visitors’ curiosity about Senator Kennedy’s political legacy as well as the history and roles of the Senate, it also helped staff to hone in on areas for iterative improvement.

“The leadership team and staff at People, Places & Design Research shaped a clear, useful, and manageable first foray into visitor evaluation for the EMK Institute, and trained our brand new interpretive staff and volunteers on best practices in data gathering. It was a wonderful experience for my team, and highly useful in planning for future visitor experiences.” — Caroline Angel Burke, Vice President for Education, Visitor Experience and Collections, Edward M. Kennedy Institute for the Senate

When investigating the character of visitors' interpretive experiences, we consider affective and social experience, learning, behavior and issues unique to the situation.